Just a quick update to say we left early and made it back sooth for Christmas.It's a bit odd reading about panic in the isles of Tescos and a chartered Hercules plane restocking the shop due to the ferry cancellations. I hope people are ok, I doubt they'll starve and there are other shops than Tescos across the isles. Having said that, well done on Tesco for doing it,great for PR that's for sure, just lucky you have the finacial backing for it.

In other news my lingering lurgy has turned out to be whooping cough. It just moved up a gear and I'm in full whooping suffocating mode at times; it's scary and horrible especially when you wake up at night coughing and suffocating. It must be truely awful to see kids with it. Nothing to do but wait for it to clear up which apparently can be up to 3 months!

Anyway seasons greetings to you all and I hope the weather sorts itself out in time for out return trip to Shetland after New Year!
Posted by Moder-dye at 13:25 6 comments: Links to this post

This horrible lurgy of mine has been hanging on so I've not been up to much other than work and resting up. We have had some great frosty weather and clear skies, but Friday and Saturday were pretty horrible with gales and a storm surge that has left damage in a few places. Today, however, was lovely day, so I went for a little potter and some fresh air out along Kebister Ness just north of Lerwick.

Again looking south over The Stacks of Vatsland. There are some small arches and caves here that the water was pulsing out of, but I couldn't get down for a close look as the tide was fairly high... 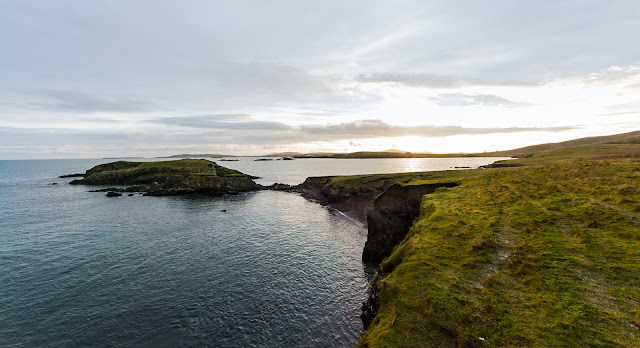 Looking out north-east to the end of the ness with South Nesting in the distance... 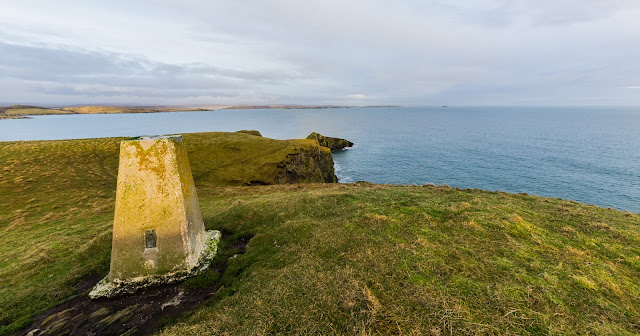 Looking back down the ness the way I came... 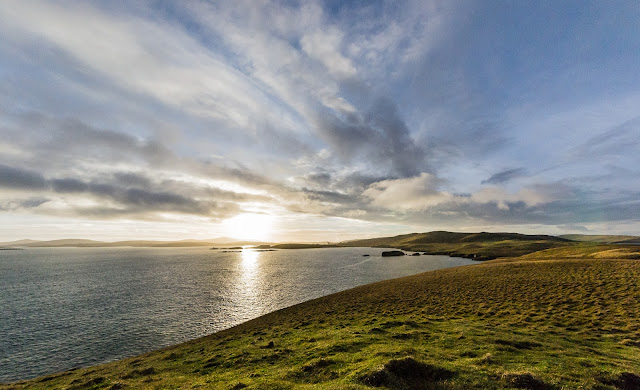 At the end there are 3 distinct sharp ridges that stretch out into the sea with deep geos between them. It's a pretty lovely spot... 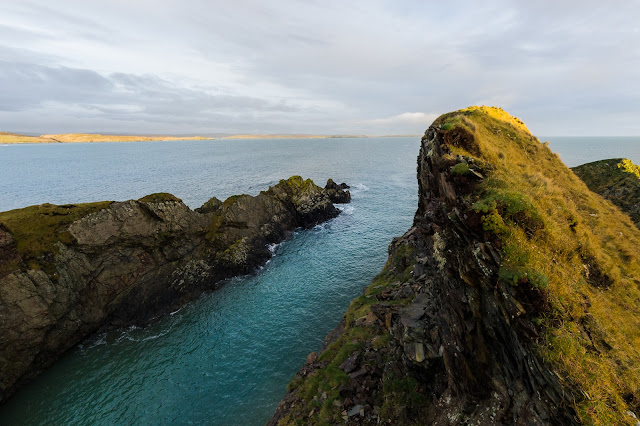 From the end of the central ridge... 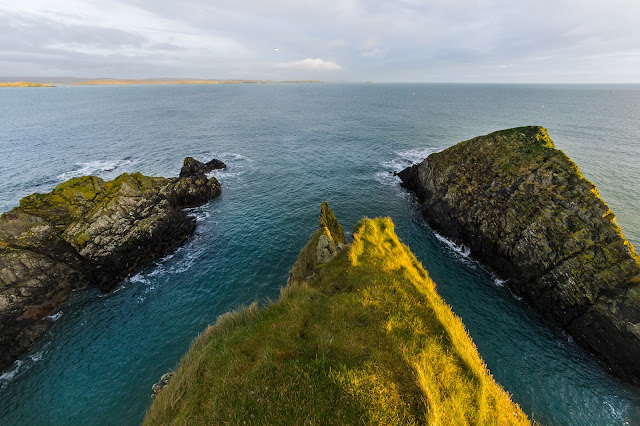 The northern ridge gives an easy way down to the sea so I went down for a nosy... 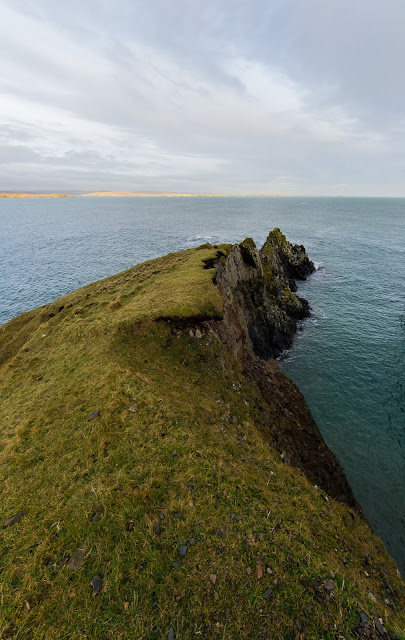 The caves and geos along this coast aren't the most dramatic but they still have their moments with this little cove giving a regular spurt of spray along with some impressive sounds... 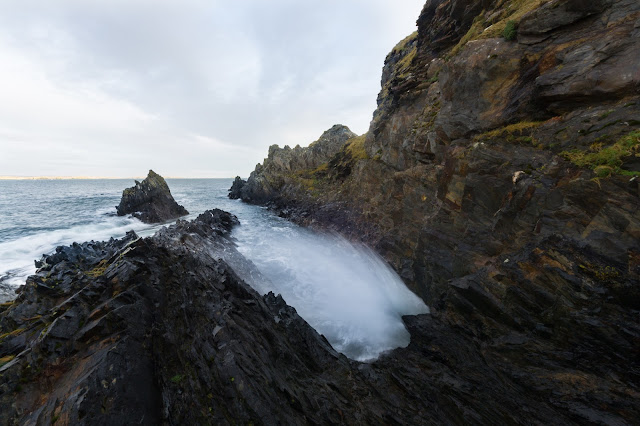 Quite a nice spot to sit and watch the sea for a while...

I headed back to the car along the north eastern side of the ness to Doos' Cove. There were a surprising number of shags on the rocks around the ness, but I never saw any pigeons, which I guess the cove is named after.

Here's the veiw looking back up the headland from Doos' Cove... 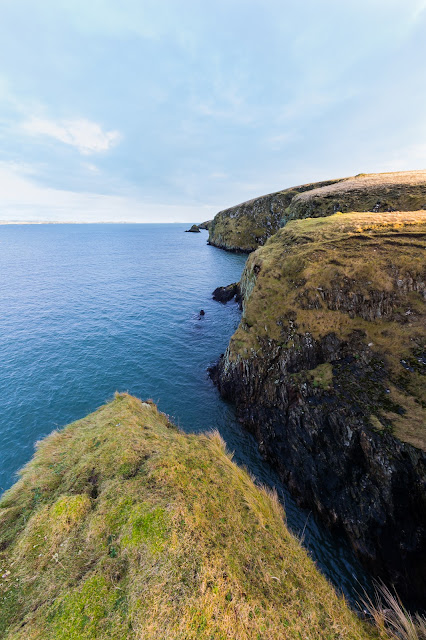 Once home it was time to check the car over while we still had daylight for our trip back home later in the week and a quick run down to Meal Beach with Beren for some more pottering. Kebister Ness is a nice little headland, all the more so for it being sandwiched between some of Shetland's industrial areas. I think I might be back in  the summer with my dry suit for a splash about to look in some of the little caves and arches.
Posted by Moder-dye at 22:20 3 comments: Links to this post

A quick trip to Sumburgh

We decided to escape the house in a clear spell today to get some fresh air and drove down to Sumburgh. We had a sneaky look around the Old Scatness site in a light sleet. Pretty impressive and I was surprised how many remains are there; it looks pretty small from the road.

Next stop was a sneaky look around Jarlshof in a bit sunnier spell.

Sumburgh Head on the left, Scat Ness on the right...

Again it's pretty impressive inside Jarlshof with the old broch remains, lairds house and the like... 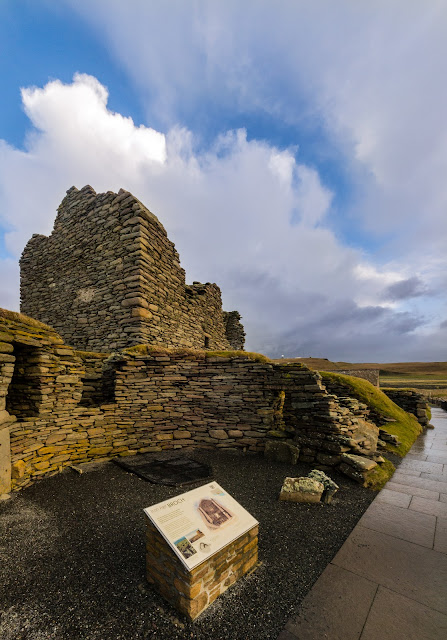 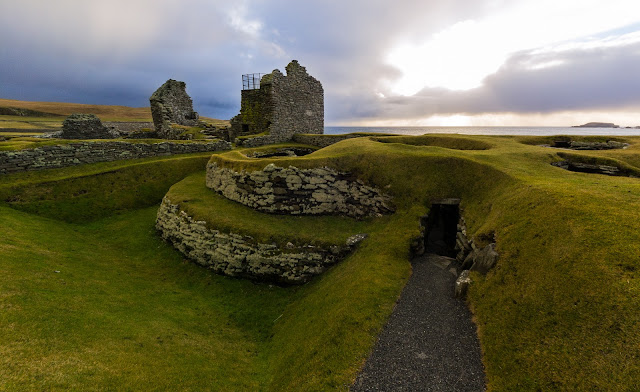 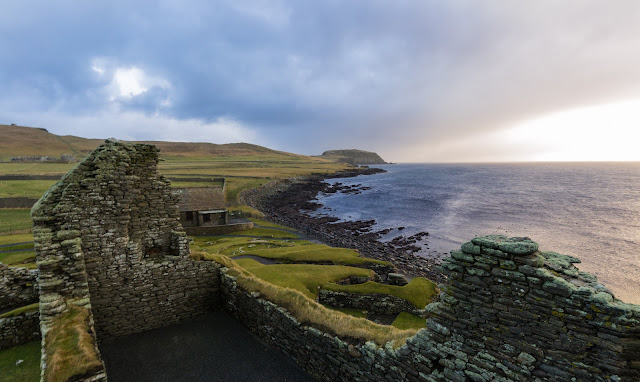 There's much much more to the site, but again spell of sleet put the camera away and soon we were back in the car for a scenic trip home via Spiggie and Bigton. We stopped at Spiggie Beach and had a mooch for a while and headed round to a little secret beach near by, disturbing a few seals as we approached and then continued home.

I'm hoping both my chest and the weather improve for next weekend as after that we'll be home south for a couple of weeks, so a weekend out and about before we go would be great.

Posted by Moder-dye at 17:54 No comments: Links to this post