We had our first day real day of snow on Friday, not that it laid, so me and my friend Martin Rickard of Sea Kayak Adventures UK went for a wander on a snowy Ronas Hill today...

Just a scattering of snow, but enough to help the mountain hares hide... 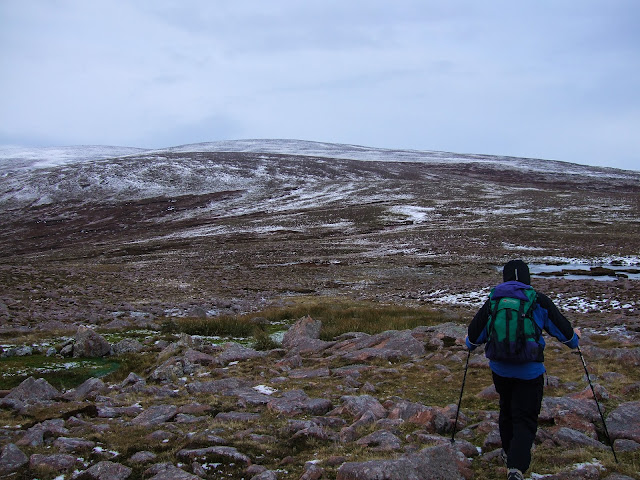 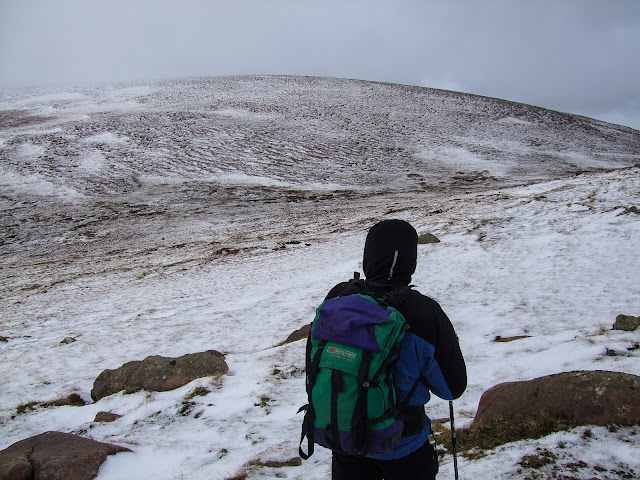 At the top we could see out over Eshaness and the snow coming in in short showers over the sea. Here's the summit trig... 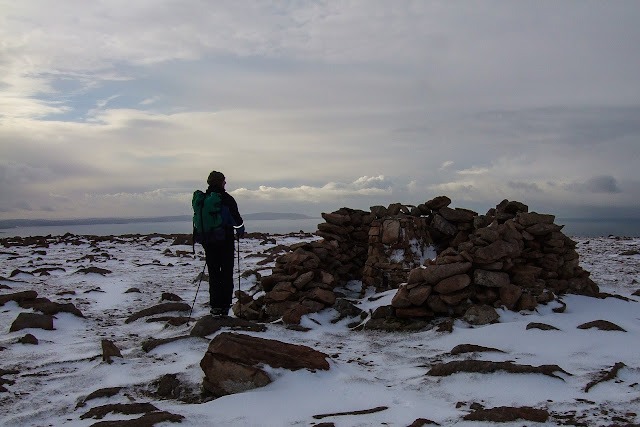 And the neolithic chambered cairn... 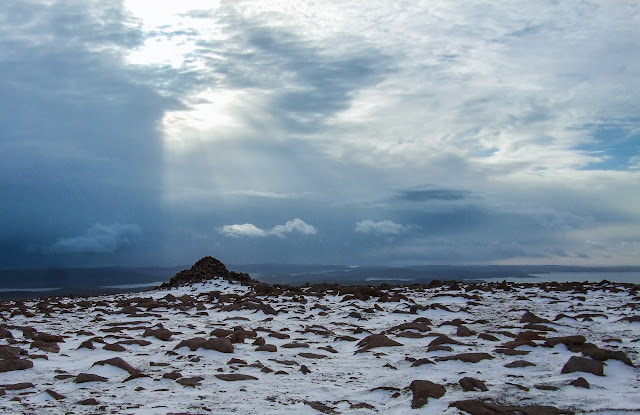 Time for a quick bite to eat in the group bivi shelter... 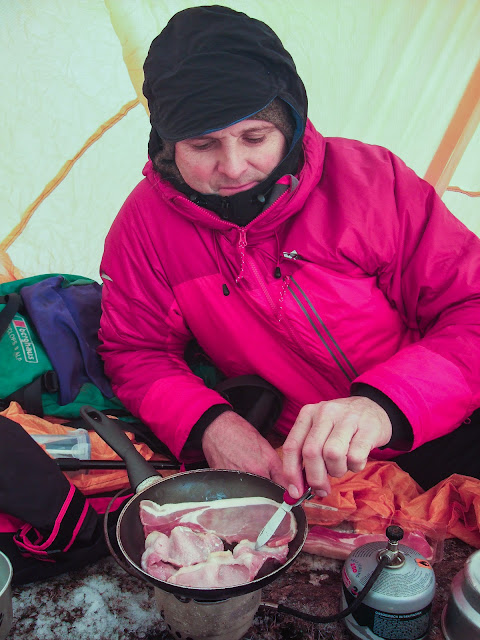 And then on over the top toward Da Lang Ayre. Here's the view over Hillswick Ness with The Drongs sticking up on the right... 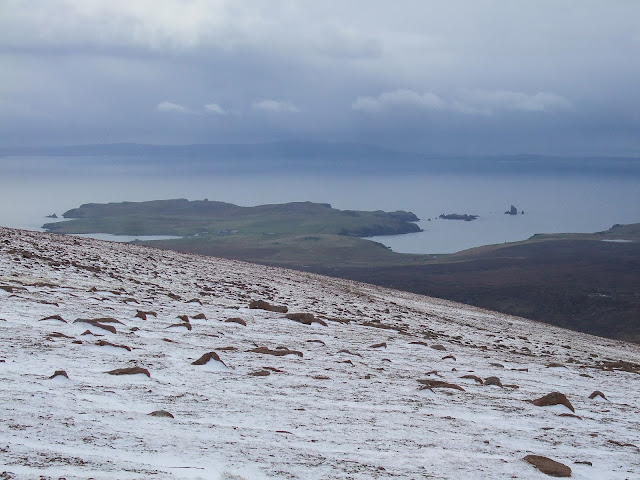 And looking across Ronas Voe to Eshaness with the snow showers heading in...

Near the cliff tops are  massive cracks running along the coast and humps and mounds like some ancient earth works. Interesting geology. Here's Gruna Stack just off the shore from Turls Head... 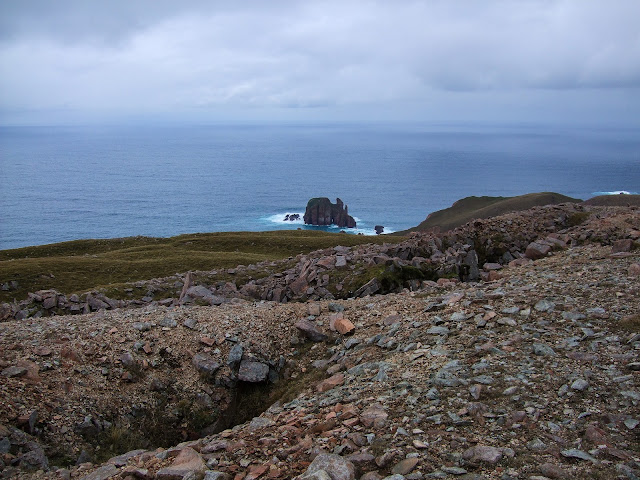 And finally a wonderful view down on to Da Lang Ayre. It's a fantastic sight! 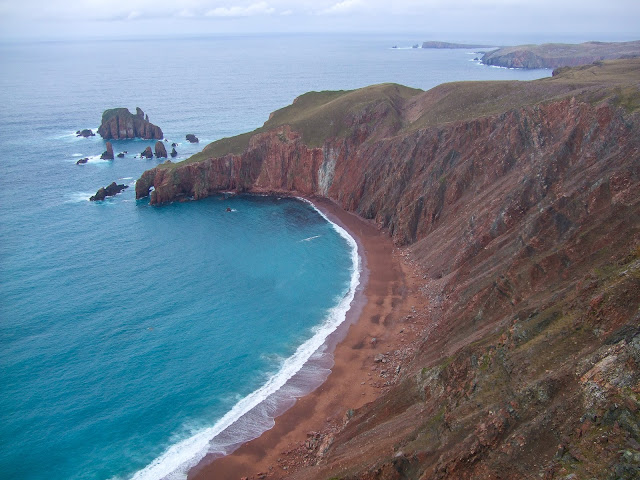 And looking back across Ronas Voe with The Cleiver and Hog just off shore where the route to the beach comes down... 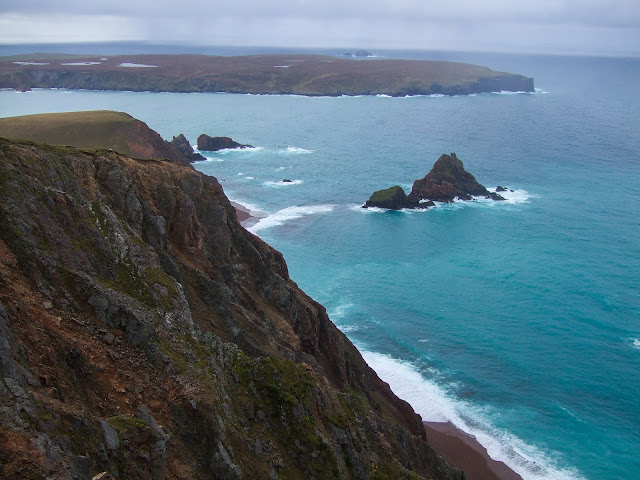 Sadly we didn't have the time (or to be honest the energy) to go down to the beach today but some things are best appreciated from a distance anyway.

We've now got rain instead of snow, boo hoo, so there'll be no snowmen yet.

Out and about sans camera...

Grrr... my camera has broken again! The mirror has fallen off for no good reason so it is away at the camera hospital and should be back shortly. I must have got a Monday morning/Friday afternoon camera (it was a warehouse return) as I've not even had it a year and had a stuck shutter and now this. Any more issues and it's a new body as I'll have spent £250 in repairs on if after this! Oh for the want of a warranty.

Anyway yesterday Clare and I had the day off to go out and about with Beren, though he wanted to go to day care! The plan was some geocaching heading north and fish and chips at Frankies, Beren's favourite.

It was gorgeous as we headed out to our first stop was out past Aith near Vementry. Then as we left the car and got so far along the hills we were hit with a heavy sleety shower. We had some serious issues finding the geocache, not helped that I notice a numbering issue on the OS map! The eastings numbers printed over the grid lines  went 28, 29, no number, 30, 31...  so from 29 onwards the numbers were 1 out. I'll let OS know. We got pretty wet not expecting the unexpected shower, but the views were amazing and I saw my first mountain hair of this season that was almost back to white. I do have a few photos on from my works camera. 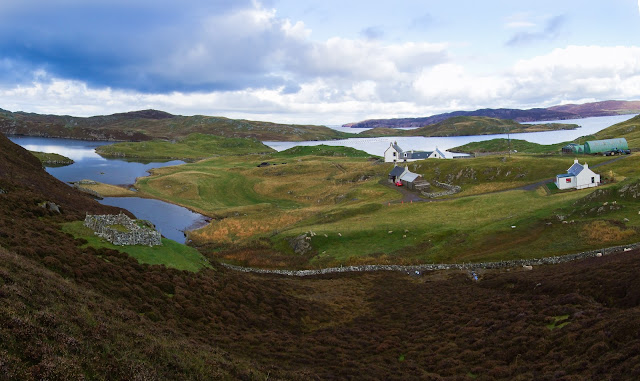 A bit soggy we gave up on the geocache and headed back in to Aith and over the Alps road to Voe; hitting a quick geocache before carrying on to Frankies. As it happened our delays with the map worked in our favour as if we'd got there earlier there'd have been no seats as a bus full of elderly people were just leaving when we got there. Not all bad then!

It was now mid afternoon and a fantastic day with not a spot of wind, mirror still waters and gorgeous skies. Ronas Hill was beckoning in the distance and Beren was up for his first accent of Shetland's highest point. We parked up at Collar Firth masts and ticked off another geocache before setting off up the hill. Sadly it wasn't long before we realised Beren really wasn't loving the trek. After much cajoling we knew there was no way we make it there and back in day light, so we aborted the summit attempt and basked in the glory of the day on a beautiful hillside and also saw another hare. 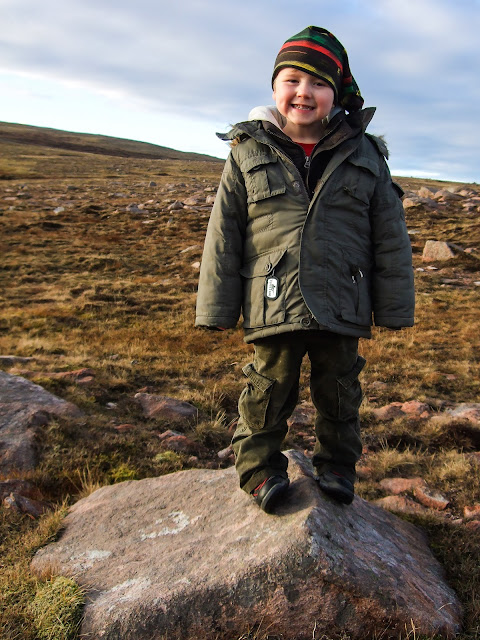 Though Beren didn't want to go up Ronas he did want to do some more geocaches, so next stop was Nibon. A quick cache and dash not far from the road was followed by another session sitting on the banks looking for otters as the sun set over Nibon Isle.

Looking out to sea at Nibon as the sun sets... 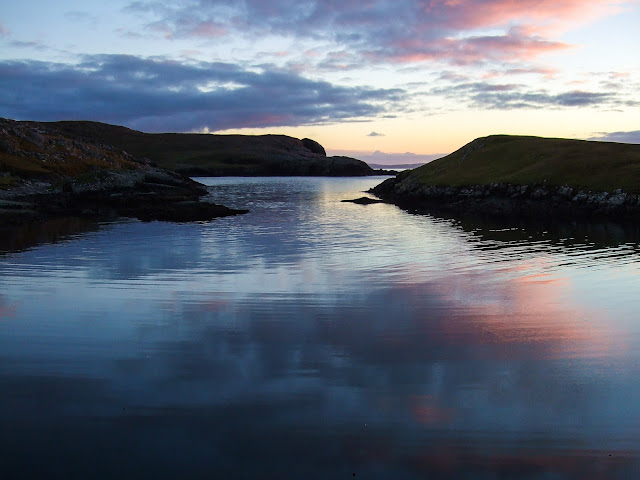 Clare looking for any illusive critters in her posh jumper... 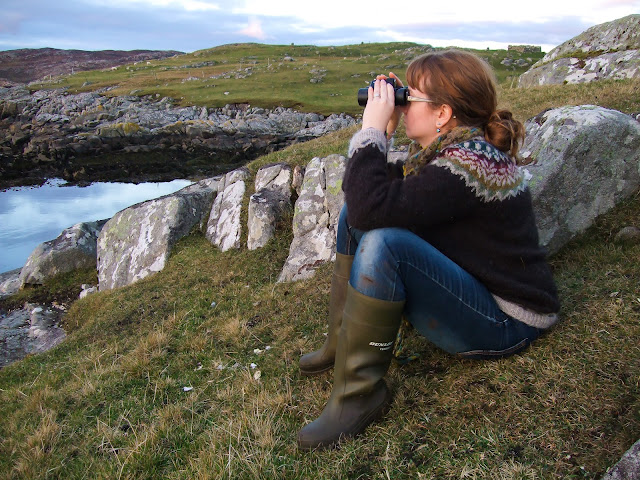 Sunset over the Isle of Nibon... 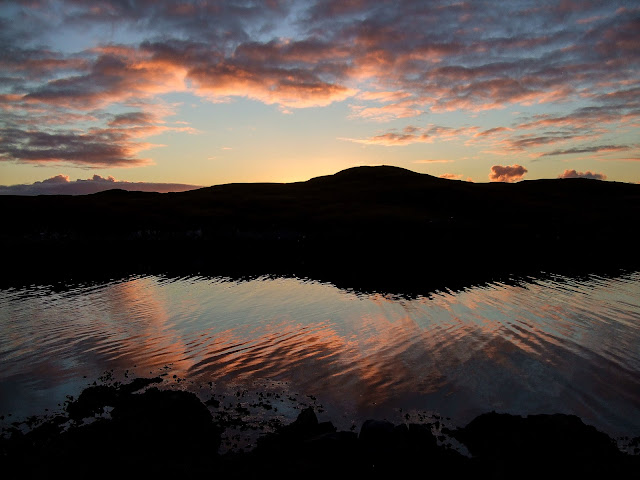 We didn't see any otters which is unusual for this spot, but we did watch a seal and the bird life before heading off in the dusk for our final venture to an old mill near Muckle Ayre on Muckle Roe. Little did I know that there had been a humpback whale sighted hanging around close in in the bay earlier in the day, we didn't see it though and we didn't find the geocache in what was by then a star lit night with a crescent moon slowly rising over the sea.

We were back late, but what a wonderful day we had.

I may have missed what seems like it was a spectacular aurora display a week ago as I was tucked up in  bed poorly sick, but I did manage to catch a bit of a display this Saturday night. 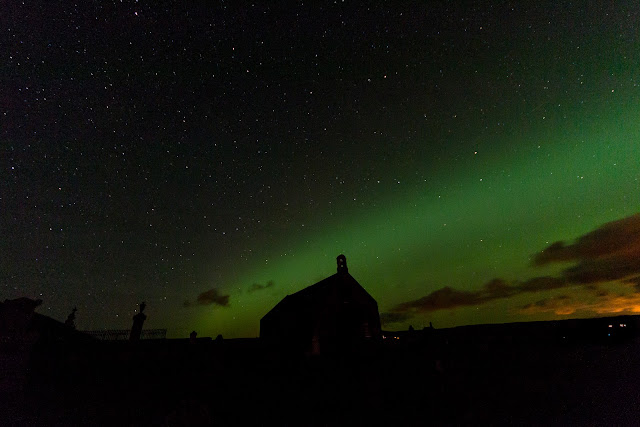 I've not got the hang of this aurora photography yet and these pics are no great thing, but they are my first attempt this season. In the past I tried very long exposures with a low ISO (over 1 minute), but after some reading up I thought I'd try higher ISO for shorter exposures (20 secs). I also tried with my ultra wide angle lens, which seemed to work well if you ignore the distortion, thinking I'd get a good coverage of it with out start trails. Fiddling with too many variables in one night has lead to some noisy photos, but I thought I'd share anyway.

I also tried lighting up the Kirk with a torch for part of the exposure... 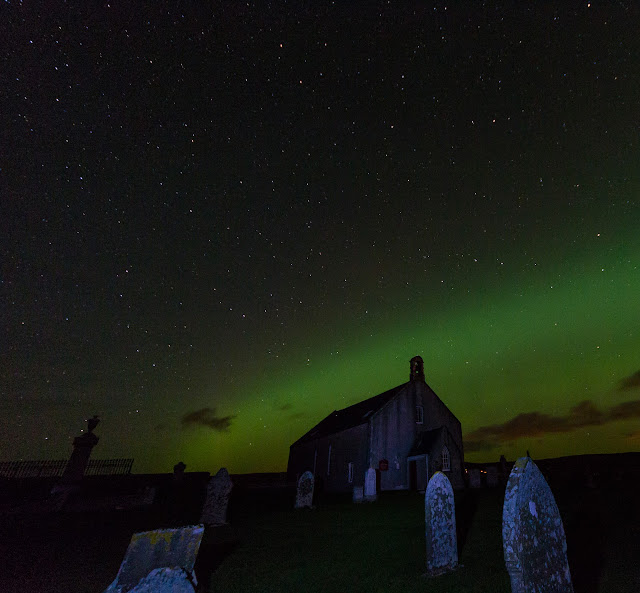 If I can get the exposure right with minimum noise I might get there eventually. Plus being in the right place at the right time helps to catch the more interesting features of it. 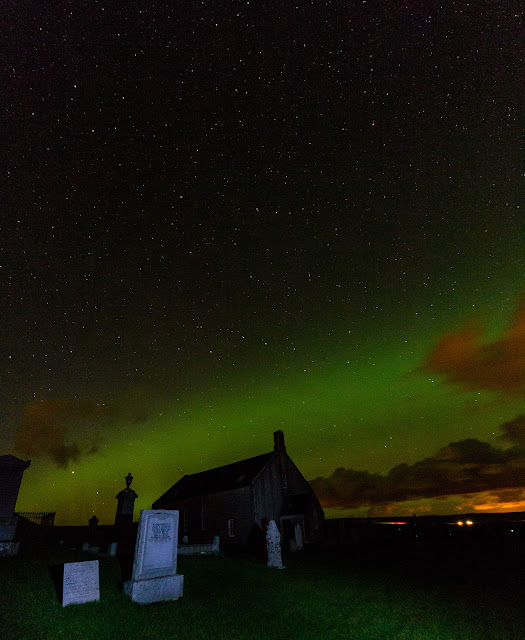 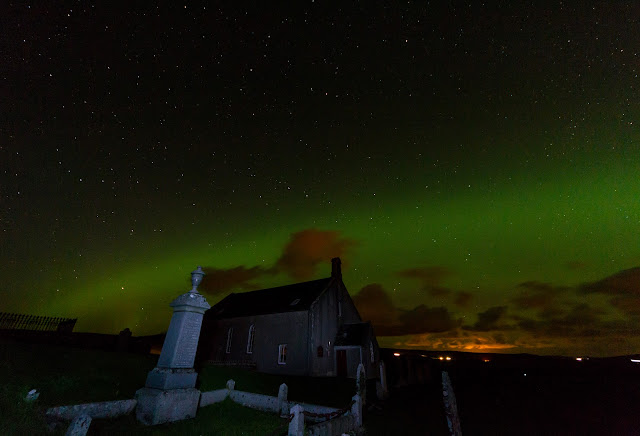 If you're up here and wanting to see them sign up to aurora alerts on twitter which will tell you when they are likely. I also check on The University of Alska Fairbanks forecast if it's looking likely which gives a better idea of how good it might be (Just click the map on the left for Europe and also look at the map on the top right). Of course it needs to be a clear sky and not too much wind if you're after photos.

After spending a bit of time at the Kirk I headed up the Lang Kames and stopped in a likely spot of darkness.

Here's part of the Milk Way through the aurora... 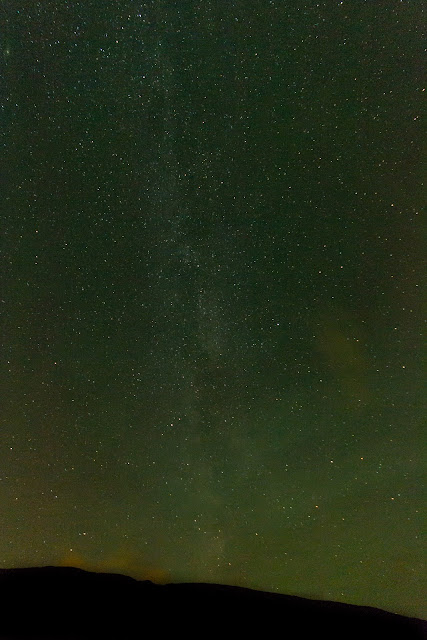 And looking north along the road... 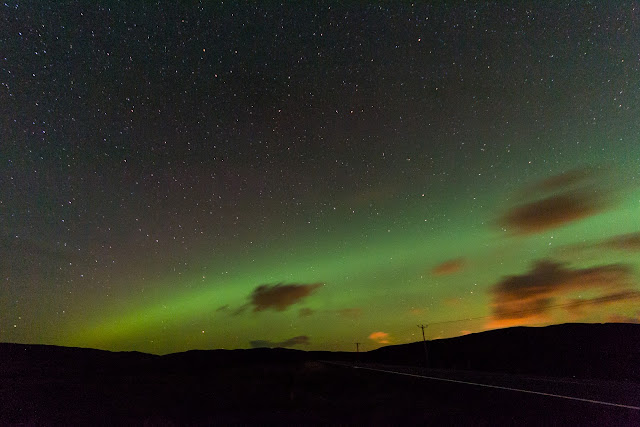 The odd car added a rear light trail to the road. Some one even kindly stopped to ask if I was broken down, no I'm just taking photos, but thanks anyway! 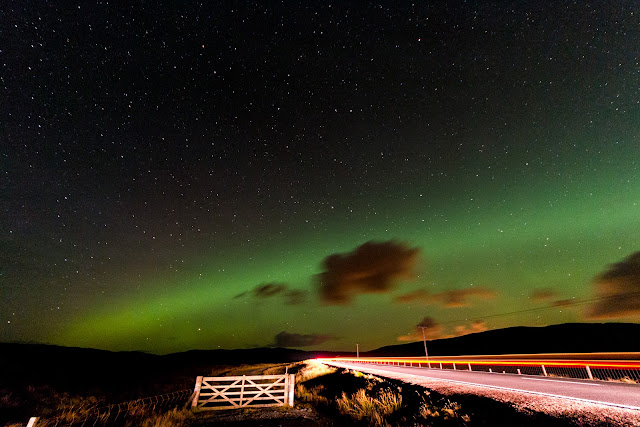 It wasn't late, only around 9.30pm but I was tired so headed home. While faffing in the house with photos I looked out the back and rather than just glow there were columns shooting up into the sky. In a flap I went to try to take a photo, but my memory card was still in the computer. Then I thought I'd better just go and get my tripod from the car. Next as I headed into the back garden next doors security light came on a blaze! And by the time I was ready to take a photo the rays had died down and were just showing occasionally... 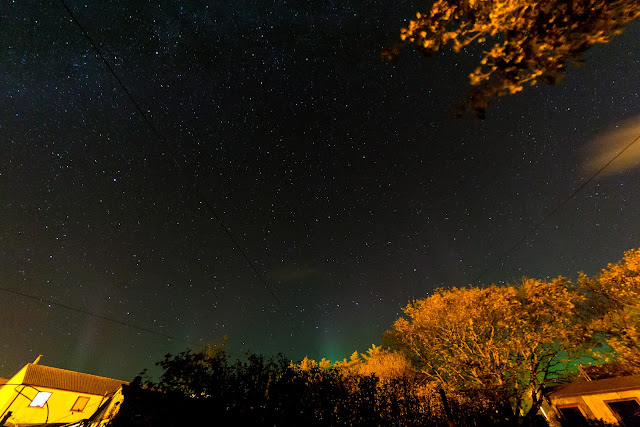 So a quick guide to photographing the aurora from some one who's not great, but has read up on t'interweb!

After a fortnight of hardly leaving the house what with flu followed by chest and throat infections I decided I needed to try and get out for a spot of fresh air and stretch my legs.  The tide was low and the car needed a run and diesel so I decided to go over to Lerwick and out to Rova Head. You can't go through the old tip and recycling plant, but when the tide is out you can make it around the rocks.

Despite the wind I tried for a few long exposures looking across to the lighthouse with a 10 Stop Haida filter that I got recently. It'll be good to use it on some waterfalls and beaches when it's not so windy... 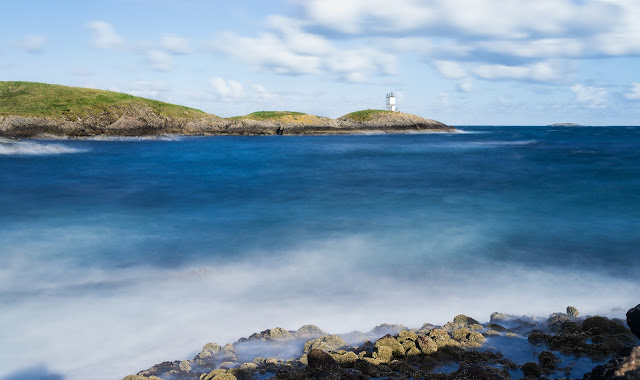 East Rova head and the shingle strip connecting it to the mainland, does that make it a tombolo?

It's a lovely series of low lying humps out to the light... 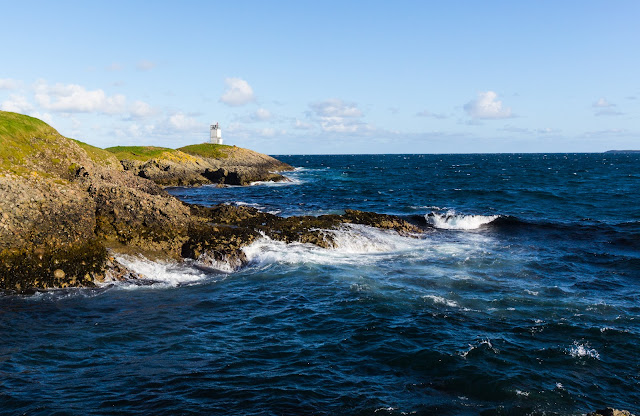 Bressay to the right of the photo... 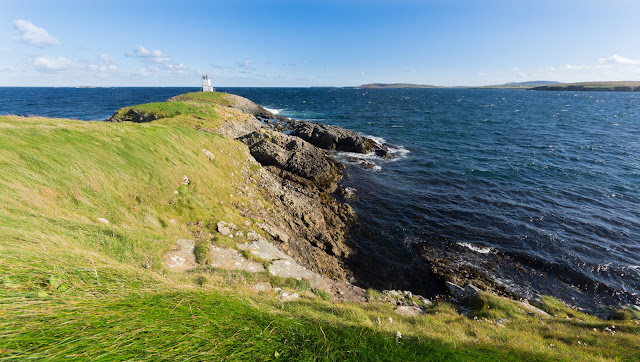 Looking north to West Rova Head and over the Holms of Vatsland to Kebister Ness which I'll wander along another time... 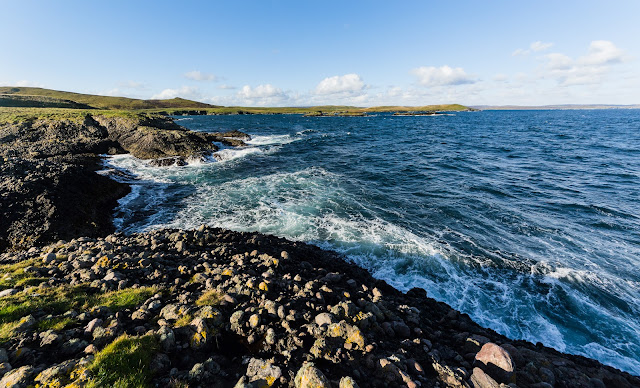 It's only a short wander, but clambering over the rocks took it out of me. Still it was nice to take the airs and see a different view. I've been getting aurora alerts all day so fingers crossed for a clear sky tonight and the ability to stay awake for once!
Posted by Moder-dye at 17:39 2 comments: Links to this post

Feeling a little better this weekend I decided to put some of my armchair/YouTube bushcraft to the test and make a couple of cheap and cheerful stoves from old cans. To be fair I don't need to as I have a perfectly good Trangia and on a day out a flask is a lot less hassle, but not so much fun!

First up was an alcohol jet stove. Two recycled coke cans, a penny and a dash of meths... 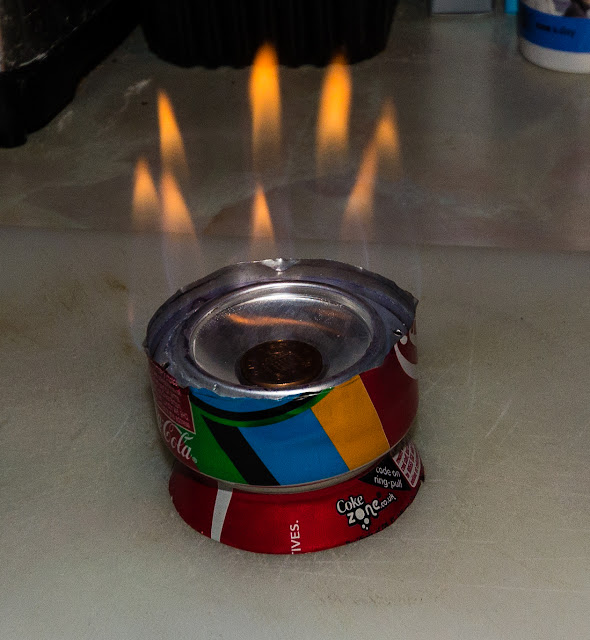 Another low cost and efficient wood burning stove is the wood gas stove. One large tin and one normal sized tin (tomato soup in this case)  are holed and fitted together. it took about 30 minutes to make this rough and ready trial one. 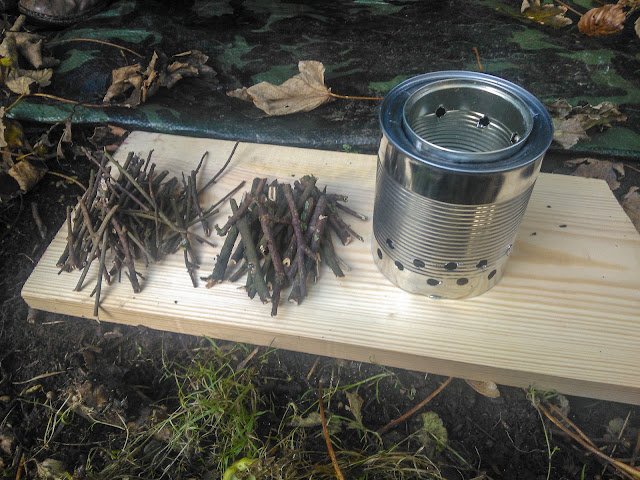 It burn with scraps of wood and has a secondary burn of the gasses given off which should mean a pretty clean burn. We gave it a go just using some dead wood fresh from the flowering currant bushes in the garden. So for all they were dead the were damp and not split or anything they burnt no problem, just a little more smoke than is ideal. I'll put a little video here when it'll upload...

Later we went west for a drive over to Da Gairdins I Sand and started off with a picnic and a cuppa on the rocks near the old St Mary's Kirk... 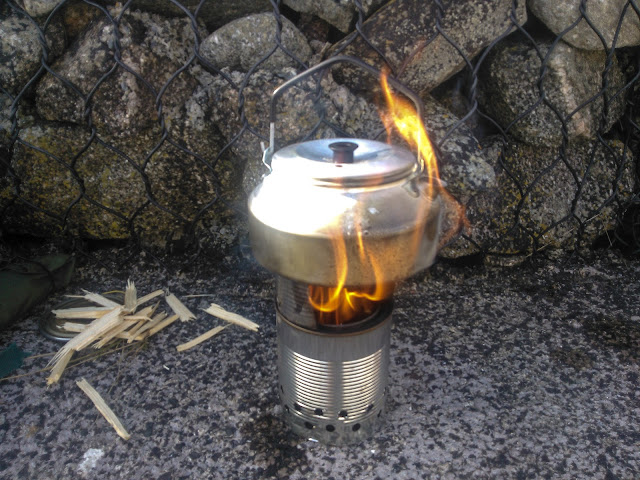 I'll stick up an separate post with some photos of Da Gardins and there abouts as the internet is being particularly bad this weekend.

Posted by Moder-dye at 21:20 No comments: Links to this post