Before I bought our family kayak I'd managed to get hold of an old Minn Kota electric trolling motor and battery off some one up here. It looked old, a search of the internet eventually turned it up as being very old and only 9lb thrust, the modern range starts at 28lb thrust. Other googling suggested that it should still push the kayak along at a steady paddling speed, which would be good enough. It was only intended as a back up in case we got tired, or felt lazy on a day out, not to turn the kayak into a speed boat!

So today we wandered down to a friend's at Gulberwick to see about mounting it on the kayak. As luck would have it the kayak has a hole in the stern to accept a rudder post so it was simpler than we thought. Drop a bolt through with an 'L' shaped bracket on it and attach a marine ply plate. This left the handle for the motor which is a twist grip control out of reach though so a piece of high pressure piping was attached to it to extend forward to the rear seat as a tiller and for turning it on and controlling the speed. It turned out that it was actually easier just to use the kayak paddle as a rudder for steering though. The 12v battery sits right behind the rear seat.


Here we are setting out for a first trial. I'd had to remove an over enthusiastic Beren who just jumped straight in ready to go, even though he only had his normal clothes and shoes on! 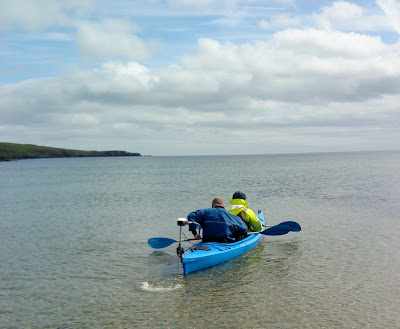 We headed out along the north side of the bay past seals, oyster catchers and terns on Skeo Taing; nosing into Stava Geo and out to just short of The Rippacks on The Ness of Trebister before crossing over to the south side of the bay to Lyoonigeo Skerrie for the return journey.


Just on our way out after re-adjusting the prop. depth 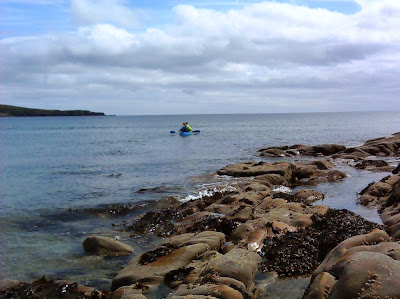 On the way across the bay the fulmars were in full attack mode as usual zooming towards us and then pulling off at the last minute, flocks(?) of shags were going in and out the bay over us and we had the delight of seeing more puffins and razor bills close up as well as guillemots and eider ducks. It was great.


Here we are just about back in 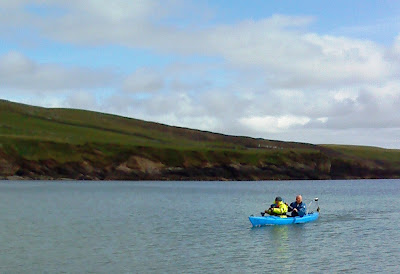 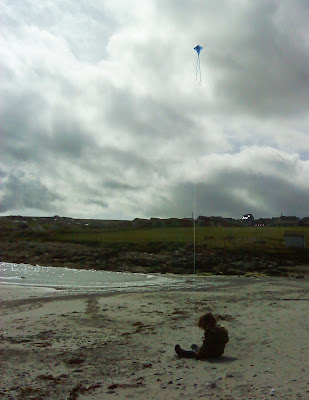 Our eclectic electric Heath-Robinson affair certainly did the trick, but I'm going to do away with the 'tiller' from the motor and just put an on off switch near me at the back seat. The only other problem is that the prop needs to be lower than the keel of the kayak to stay at a proper depth so nosing into weedy holes might be an issue. But if we plan any longer trips it'll be worth the little security blanket for tired arms or unexpected wind.
For all it's only rated at 9lbs of thrust it pushed us at a steady paddling speed. Another friend has a 33lb thrust motor I reckon we'll be up and planing with that! Now where's his number...
Posted by Moder-dye at 20:17