The wrong side of pain...

This morning I took Beren to nursery and then took the small nursery group for 30 minutes to chat to them about the didgeridoo, play a bit, dance a bit and show them a video. What a lovely group they were, a credit to their parents and the staff at Mossbank Primary.

When I'd finished it was lovely and sunny so I managed to convince myself it was just the occasion for a trip to The Hams on Muckle Roe to check out how it would be to get Beren there in the pushchair. The signs said it was 4km from the last house so, after over 3 years of not being able to use my bike I thought I'd cycle over. The logic been that I could pedal on the flat, freewheel down hill and push up hill. It'd be faster and easier than walking...

Well memory is a great thing, when you have it! I'd forgotten how tiring even free wheeling down a bumpy icy puddle filled track could be. Out of the seat, weight back, moving your body constanly to swerve this way and that, absorb shocks, hop obstacles, plan the route ahead and that's on a pretty good rough track. Add in some puddles that are water and some that are ice and I nearly came a cropper with a front wheel slip, but luckily though I'm pretty rusty I managed not to go down in a heap at 42km/h on a rocky track with no one around. My heart definitly skipped a beat though!

It was wet, cold, I was in pain, but it was a great place and oddly enough it'll be fine to get Beren there at the weekend. Oh and it's not 4km, the round trip was 11km on bike computer.

I'm not feeling too bad after the trip now, pretty wipe out but not in pain. I did bite off more than I could chew and ended up way way on the wrong side of pain for someone who has to watch their activity levels and was a bit worried about getting back, but hey I'm here and may be there won't be a next time!

Below is a short video of the trip and some photo's too. Hope you enjoy the tour...

Burki Water, about half way there

Town Loch and the North Ham 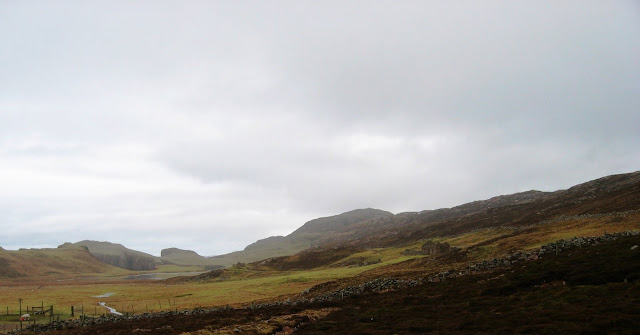 Looking North towards the Drongs