Today is a stuningly gorgeous day in Shetland. Blue skies, not a bat of wind and snow dusted tops. Pity Clare had to take my camera with her to Unst today! So apologies first for the poor pictures off my decrepit mobile phone.

I decided to have a walk to Fethaland, the most northerly point of mainland Shetland. So set off up through Northmavine past frozen lochs, frost enchanted verges and a dazzlingly pure white Ronas Hill (far distance) towards  Ibister,where the road finally stops.

I took photos of my first kye (cow) encounter on Shetland, but they seem to have dissapeared. I knew there were coos, as we buy Shetland milk, but I'd never seen them. So here they were and as you always get with coos, a gateway full of sharn to negotiate! 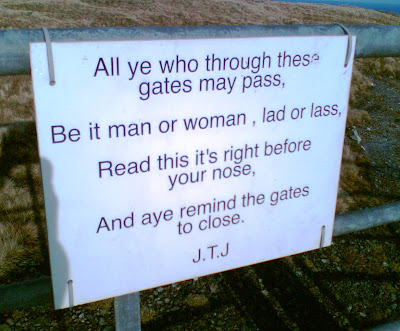 Since I've realised that stomping along is not the way for me to get anyhwere anymore I decided to treat this as a bit of a walking meditation. Thinking up, allowing my head to lead and my knees to naturally lift and let my legs swing forwards until they settled where they naturally settled. Very relaxed, stride fairly short and varying as the terrain did. I noticed an odd thing too. When I walked my arms naturally swing opposite my legs, but when I slowed down with shorter paces on the hills both arms changed to swinging together on each step. Short fast little swings back as each leg went forward. Go faster and back to the usual opposite swing, slow down and both together. How odd?
Walking along I could see Yell, red cliffs with a snow cap to the land beyond. 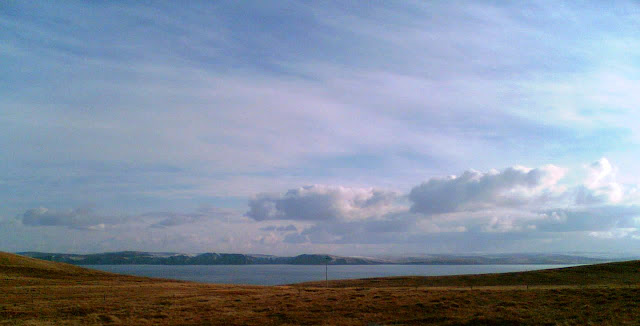 Along the way you see many old croft houses like this one in the distance. 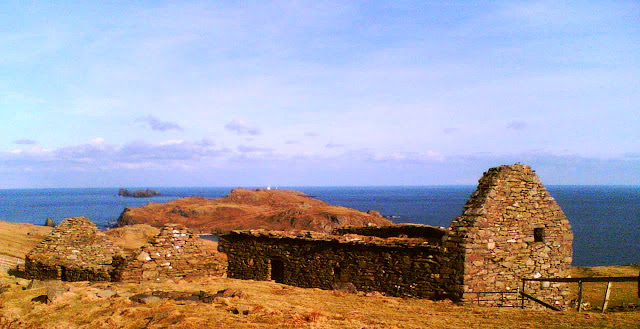 Here's the first good view you get of The Isle of Fethaland, fethaland meaning fair or good grazing land. Light house on the top and Gruney island in the distance.

As you get closer you can see the narrow isthmuth that connects the Isle to Fethaland on the mainland. 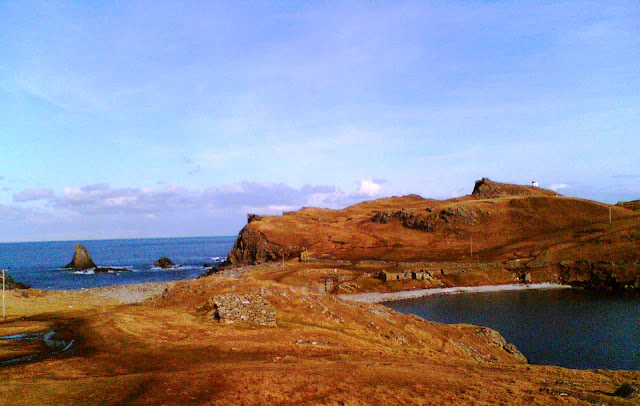 In days gone by Haaf fishermen stayed here in the summer in between going out on the Haaf (deep sea) for cod and ling in sixareens, 6 man/oared fishing boats. Sometimes travelling upto 40 miles or more out to sea before returning to prepare and cure their catch while staying in the lodges they built. Once the season was over they'd remove the timber and turf roofs and store them to avoid them getting damaged by the winter gales, only to replace them next season. 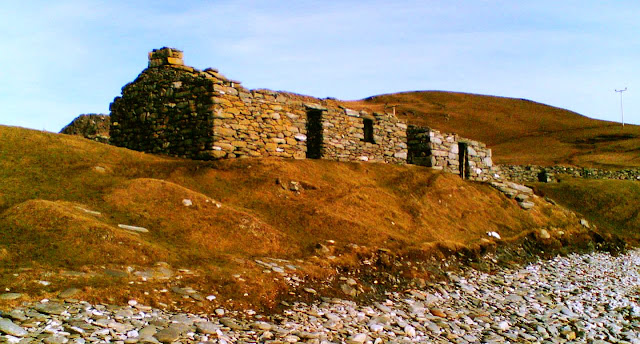 There are small stone lined recesses into the banksides where they'd drag up their boats and store them for protection from the elements. You can just about make some out in this photo of the south bay between and below the houses. Behind the houses is a feature which was thought to be the remains of a broch but the acheaologists now aren't sure what it is but, it's an ancient circular stone structure with a doorway. 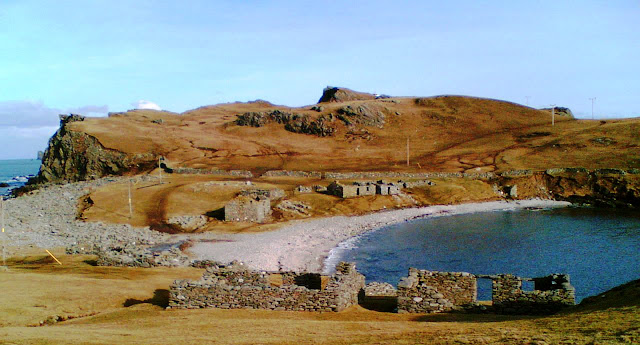 After having lunch at the Haaf homestead I thought I'd carry on up to the lighthouse, knowing that I was too tired to day to go to the tip of Fethaland or search for the klebber stones on the east side. Klebber stone being a soap stone that has had bowls carved out of it and other markings carved into it. But after setting off again one step at a time I realised I was just too tired today, so stopped, sat down, had a drink and some caramel shortbread looking down on the north bay before heading back home. 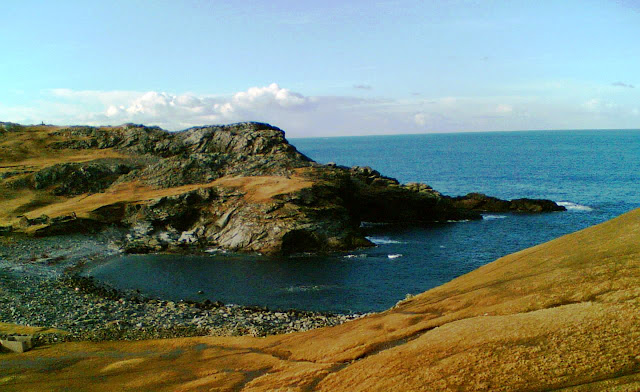 On the way back I laughed to myself as I passed a track that leads to Sandvoe and later on saw Sandsvoe itself and the site of Simon King's near death river crossing on his TV program. Poor brand new 4x4 nearly got it's axles wet! I also saw the track you could take to get to the house without driving along the beach. That's TV for you!!

Oh, nearly forgot... In a surreal experience I nearly knocked over a hoard of Vikings on the way home! The Jarl Squad from Northmavine Up Helly Aa were visiting North Roe School and wandering out from behind their erm... coach? without looking. Luckily I was looking (amused) and slowed down and the Guiser Jarl waved me past LOL! I would have taken a picture but felt a little silly being nearly 40. Hope they have a good night of it. Might even go up there tonight as it's so nice...
Posted by Moder-dye at 15:11